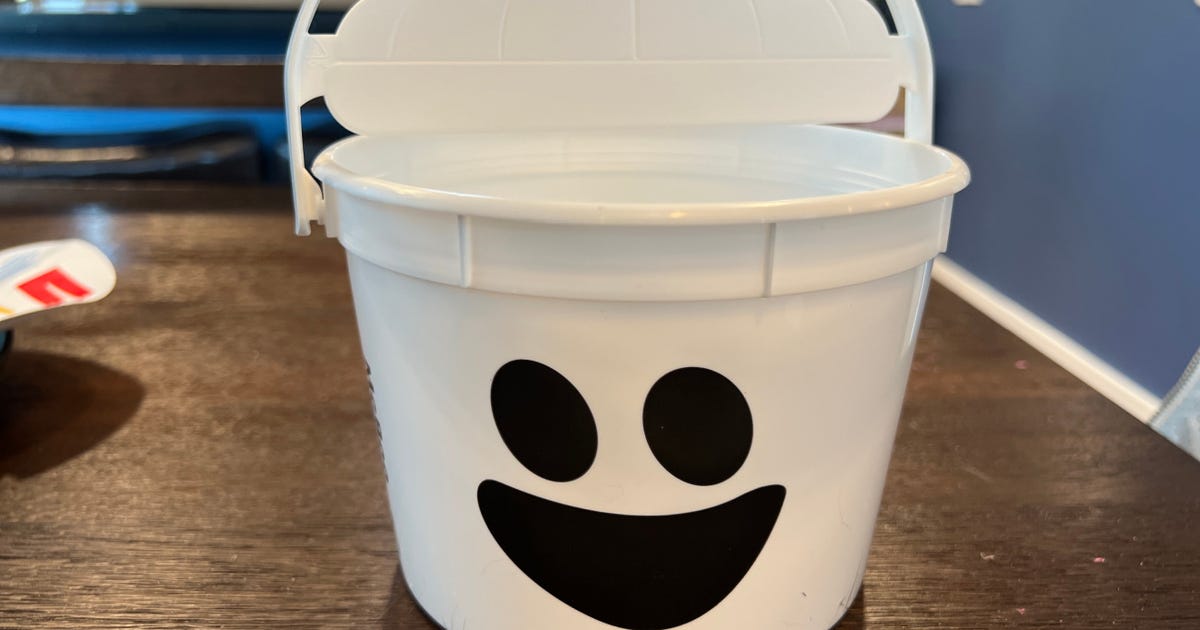 I give McDonald’s Halloween Boo buckets a solid B+

McDonald’s Halloween Bucketsaka Boo Buckets, are back for halloween. What the hell are they, you ask? They are simply plastic buckets of three designs that replace the usual paper Happy Meal containers that McDonald’s uses to serve its children’s meals.

The fast-food chain first introduced buckets in 1986 and has offered them on and off, with many changes, since then. Their return wouldn’t seem like a big deal, except that a lot of people were feeling nostalgic for their return, and anticipation for them dominated mainstream social media as the Buckets’ arrival approached.

They’re available now at participating McDonald’s across the US, and I ordered one (uh, really two) to take a look.

I ordered two Happy Meals on the McDonald’s app and picked them up at my local McD’s drive-thru. The app lets me choose between a four-piece serving of Chicken McNuggets, a six-piece serving of Chicken McNuggets, or a burger (you can upgrade to a cheeseburger). The meal comes with an order of kid’s fries, and then you choose between extra fries or apple slices, and select a drink. At the end of my order, the app asked me what kind of toy I wanted, and let me choose between “Halloween buckets”, “toddler toy” or “no thanks”. (WHO WOULD REFUSE A TOY?)

The Halloween buckets themselves are pretty much what you’d expect – plastic treat buckets that are way too small to hold a child’s Halloween candy unless they’re a whole -little. But they are still cute.

There are three varieties, but my McDonald’s only had the McBoo Ghost Face White Bucket on the first day of the promotion. (In the past, white buckets glowed in the dark, but I tested mine and they didn’t.) I asked when my McDonald’s would receive the other two colors – McPunk’n orange and witchy green McGoblin – but the employees didn’t know that. I guess every restaurant can eventually get all three colors, but depending on demand, it seems hard to know which one they give out and when.

In the past, buckets sometimes came with plastic lids that you could put on and take off, and sometimes the lids even had cookie cutters built into them. Not this year. Instead of a lid, there is…a kind of fake lid, i.e. a piece of plastic resembling pumpkin top arches between the two places where the bucket handle attaches to the bucket. It’s cute, but it will probably break five seconds after a child starts doing tricks or treating. Also, as a Minnesotan, I think the white pumpkin top design looks like the now demolished Hubert H. Humphrey Metrodome.

The food in your Boo Bucket is covered in what looks like a round piece of paper, which turns out to have Halloween stickers on it. My two Happy Meals came with the same McBoo ghost bucket and sticker sheet. The sticker sheet has designs of skeletons on one side and (mostly) pirate-themed stickers that you can peel off and use to “dress up” the skeletons on the other side.

These Happy Meals do not come with any additional toys. The bucket is the toy. But McDonald’s new Adult Happy Meals come with toys – classic McDonald’s figures, plus a new character, all of which have not two but four eyes. (My McDonald’s is sold out. Something tells me Ronald and his friends have found a lucrative oil well here, and I expect to see more adult Happy Meals in the future.)

I give McDonald’s Boo Buckets a solid B+ for promotion. The three different colors and faces are cute, and I totally get why they only sell one variety of buckets at a time. Imagine the poor, tired employee who has to take orders when little Liam wants a ghost, but Maddy wants a witch, and meanwhile, no one wants the pumpkin, and the buckets of oranges pile up in the storeroom next to 800 gallons of ketchup. You get what you get, and you don’t get mad, as they say in daycare.

I would have rated the promotion higher if each bucket had a real plastic top instead of a piece of paper and the fake top, but the stickers are a nice consolation prize, and kind of like a toy.

I don’t rate food. It’s McDonald’s. You know what it is.

Sabra Health Care REIT, Inc. will post earnings of $0.35 per share in the fourth quarter of 2022, according to forecasts from Jefferies Financial Group (NASDAQ:SBRA)