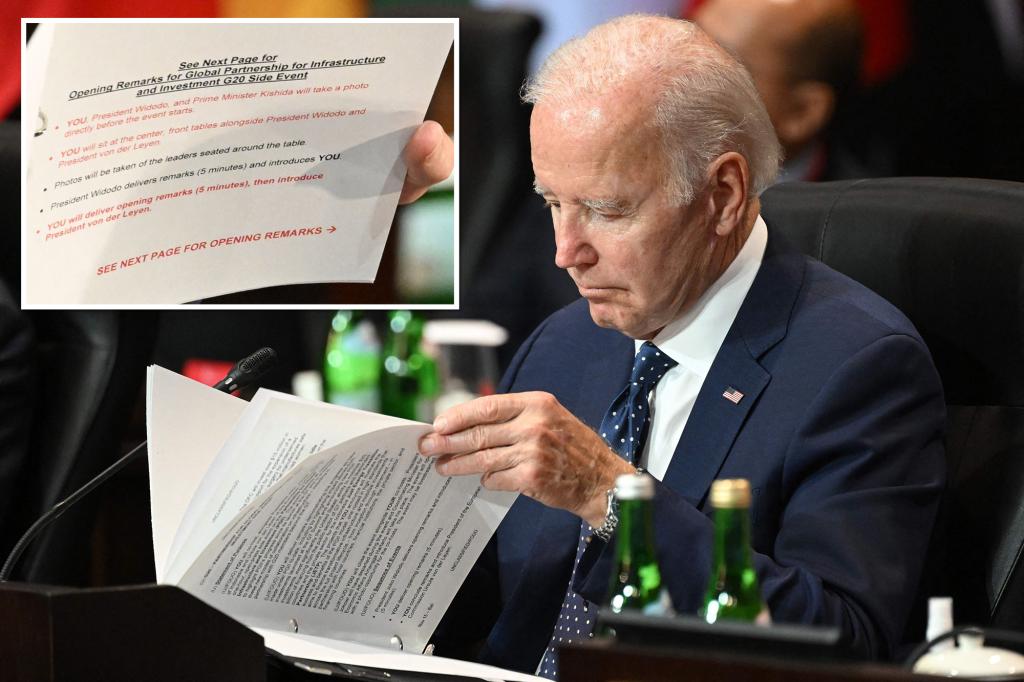 President Biden was once again spotted using a detailed ‘cheat sheet’ – this time at the G20 summit in Bali – telling him where to sit, when to make remarks and when to pose for photos.

The 79-year-old commander-in-chief was attending a Global Infrastructure and Investment Partnership event on Tuesday when photographers snapped a picture of him flipping through pages of notes.

The typed memo gave Biden step-by-step instructions on what to do during the meeting and called the president “YOU” in bold red letters.

“YOU, [Indonesian] President Widodo, and [Japanese] Prime Minister Kishida will take a photo just before the start of the event,” reads one paragraph.

Additional instructions read: “YOU will sit in the center” and “YOU will deliver an opening address (5 minutes)”.

The notes also reminded Biden, “YOU will close the event alongside YOUR co-organizers.”

At the top and bottom of the sheet, the note’s unknown author printed a bold reminder for Biden to turn the page for his opening statement.

This isn’t the first time Biden has been caught using stage directions during public engagements.

During a June meeting with wind industry executives, Biden inadvertently released a comically detailed document that instructed the president to “enter the Roosevelt room and say hello to the attendees.”

It also said: “YOU take YOUR place” and “YOU make brief comments (2 minutes)”.

In July 2021, Biden inadvertently showed a note from a staff member warning him that there was something on his chin.

Biden’s frequent and well-documented reliance on cue cards has fueled speculation among his critics that the septuagenarian is experiencing cognitive decline.

Biden, who turns 80 on Sunday, said in a recent interview that it’s “totally legitimate” for voters to question whether someone his age can serve a potential second term in the White House – but he urged people to judge for themselves whether he is physically and mentally fit for the office.

“I think the best way to pass judgment is to look at me,” he said. “Am I slowing down? Am I going at the same pace?