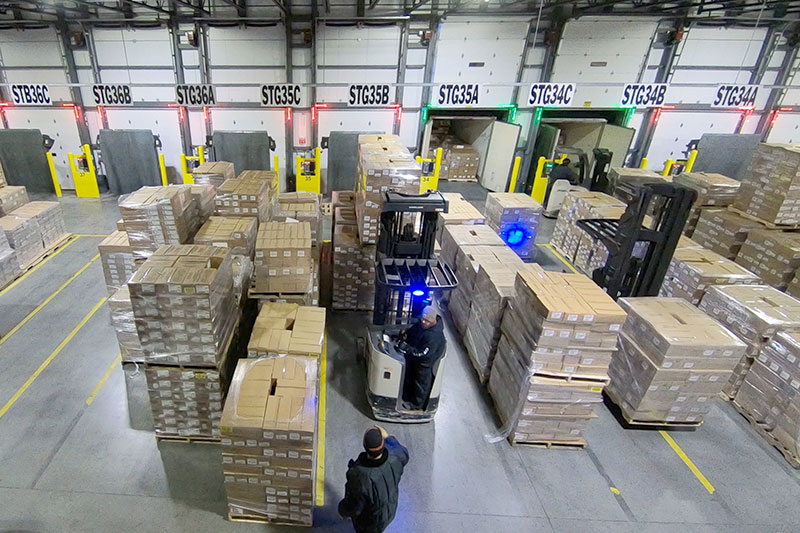 “Not everyone has the budget. The return on investment. The business case. Or the need for the risk associated with automation,” adds Hobkirk.

So what exactly is conventional warehousing in a seemingly automation-obsessed retail world?

That’s what we asked an expert panel of conventional warehousing equipment, automation and software vendors as well as consultants. Here’s what they had to say.

Let’s start with what conventional warehousing looks like. And to be honest, it wasn’t particularly difficult to get consensus here.

Basically, conventional warehousing has forklifts and a rack. There’s nothing wrong with ground stacking either. On the information side, you have barcode scanners, voice systems, and radio frequency communications. Add to that a warehouse management system (WMS).

Then our experts started to nibble on other elements. Some included the limited use of conveyors and even autonomous robots. Others included warehouse execution systems (WES). Placement Walls were mentioned in passing, as were Crate Picker Modules with WES support.

For the most part, virtually all other material handling equipment as well as data management systems and software are prohibited. However, Kyle Nevenhoven, principal consultant at automation provider Dematic, had the strictest definition of conventional no-nibble warehousing. “Conventional is well suited to a warehouse with limited order complexity and a relatively low number of SKUs,” he says.

All good, but what are the main characteristics of conventional warehousing?

“A conventional warehouse is very fluid. It has no fixed constraints [beyond rack] like a conveyor bolted to the ground. This makes these installations very flexible,” says Ryan Wachsmuth, Dynamic Storage Sales Manager for Steel King.

“Conventional is great for new businesses as well as those that are highly seasonal but have a mix of standard orders and highly repeatable processes,” says Diana Mueller, account executive at Fortna.

“Even in the face of high volume, conventional warehousing isn’t a bad answer,” said Bryan Jensen, president and executive vice president of St. Onge. And, he says, it does whether the move is dominated by full-pallet moves in food and beverage or retail e-commerce.

Unless, of course, some software is introduced, says Dan Gilmore, vice president of marketing at Softeon.

When the conventional falls short

This brings us to the dividing line between conventional, mechanized and automated. Yes, it’s fuzzy and requires thoughtful assessment to decide when and how a conventional operation has passed its peak.

For starters, there’s no escaping labor constraints. If there is a case for moving immediately to automation now, it is a persistent labor shortage that is hampering conventional operations. Period.

With that out of the way, Hobkirk quotes a minimum of 98% inventory accuracy for conventional to remain viable. “Inventory accuracy has ripple effects, whether it’s what’s on the shelves, an order being picked, or a shipment,” he adds.

There is also the matter of time, says Hobkirk. “Especially in e-commerce operations, service levels are critical. If a conventional warehouse cannot pick and ship with a same-day cut-off time of 2:00 p.m. or 3:00 p.m., then there is a need to reevaluate,” he adds.

Fortna’s Mueller adds space constraints and throughput levels. She emphasizes the latter, specifically an inability to meet service level agreements. Quite simply, it is never good to always disappoint customers.

Service level agreements are also a focus for Nevenhoven at Dematic. Beyond time and accuracy, he cites a warehouse’s ability to be store and driver friendly. Store friendly involves the ability to sequence goods in a store in an aisle-friendly manner. Driver friendliness is more associated with truck organization, single-paddle controls, or perfectly sequenced floor loading.

Nevenhoven also has a list of features that a conventional warehouse is not a candidate for automation. As Hobkirk said up top, a company may not have the mindset to spend enough capex to effect change.

Another, says Nevenhoven, is the lack of interest in going beyond a single 8-10 hour shift. “For automation to work, the business will have to overbuild to make a single shift work.”

A third is a strong pride in the company’s conventional warehouse. “This culture can prevent a company from being ready to succeed with automation,” adds Nevenhoven.

Backed by a corporate philosophy that conventional is best, there are ways to make improvements, even if it means snacking on the strictest definition of conventional warehousing.

One of the clearer options here, according to Steel King’s Wachsmuth, is to use different types of racks than conventional single-depth selective racks or floor stacking. From drive-in to drive-in and even push-back rack and more, several options can provide higher storage density. At the same time, they come with limitations such as first in/first out and first in/last out.

Either way, says Wachsmuth, these options offer the potential for increased operational efficiencies that are entirely dependent on the goals and operational specifics of the warehouse.

The same can be said of forklifts. Options for improving efficiency depend on the type of truck, from pallet truck to counterbalance truck, and the combination of these types of forklifts in the fleet. Most people considered the man on forklifts to be outside the realm of conventional warehousing. But they might still be worth a look.

Still on the inventory transportation front, the limited use of conveyors and autonomous robots is also an option for improvement. However, the extent to which either violates conventional warehouse covenant may be a point of discussion. Either way, the main goal would be to minimize how they change the footprint and flow of the facility, which of course is easier to do with robots.

Yet another option that encompasses both racks and trucks in particular is the layout of the facility, says Fortna’s Mueller. She explains that travel time is an important factor in determining inventory speed. In fact, a warehouse may well have the right mix of equipment, but require a different layout to speed up inventory and order fulfillment.

Jensen of St. Onge adds that travel time can also depend on where different types of inventory are stored. For example: are fast movers closest to the docks and slow movers further away? No need to change the layout, just the storage locations.

The power of software

Interestingly, no one has introduced other types of data capture beyond wireless devices, scanners, and voice systems. However, the discussion has widened a bit when it comes to software beyond a traditional WMS, which typically manages inventory, order picking, and shipping.

As Softeon’s Gilmore explains, the ability to assign the right work at the right time is critical to success in a conventional warehouse. A WES is at the heart of this.

“A WES provides real-time, granular visibility by area in the warehouse,” says Gilmore. “In addition, the software levels the workload across the entire facility and automatically initiates orders. This activity is based on order priority, human resources and carrier deadlines,” continues Gilmore.

It tells the story of a third-party logistics (3PL) provider that added a WES. “The company doubled its productivity over the holiday season compared to the previous year without the help of WES,” says Gilmore.

He also cited the benefits of adding shelving walls and other non-automated picking modules to a conventional warehouse under WES leadership. Increased order consolidation and related order processing efficiency is a typical result.

Which brings us to slotting software. The idea here is to store the product in the right place for its level of activity. This makes it appropriately accessible whenever needed. “Slotting software also minimizes travel, improves productivity, and optimizes the movement of people,” says Fortna’s Mueller.

Additionally, according to Gilmore, positioning optimization is particularly effective in managing SKUs when there are not enough selection faces for all SKUs or you expect large increases in demand. “Slotting software dynamically creates new slots until demand is met,” adds Gilmore.

Jensen describes something he calls “fat slotting”. In this diagram, the warehouse is divided into several (perhaps only four) quadrants. Each contains SKUs that evolve at roughly the same overall rate. This has the effect of creating four separate picking areas within a larger warehouse, reducing travel distances to a quarter of what they could be if the entire warehouse were treated as one picking area.

That said, conventional warehousing has a lot to offer a wide range of order fulfillment operations. And perhaps just as importantly, there may not always be as much pressure as perceived to switch to mechanized and automated components when performance needs a little TLC.