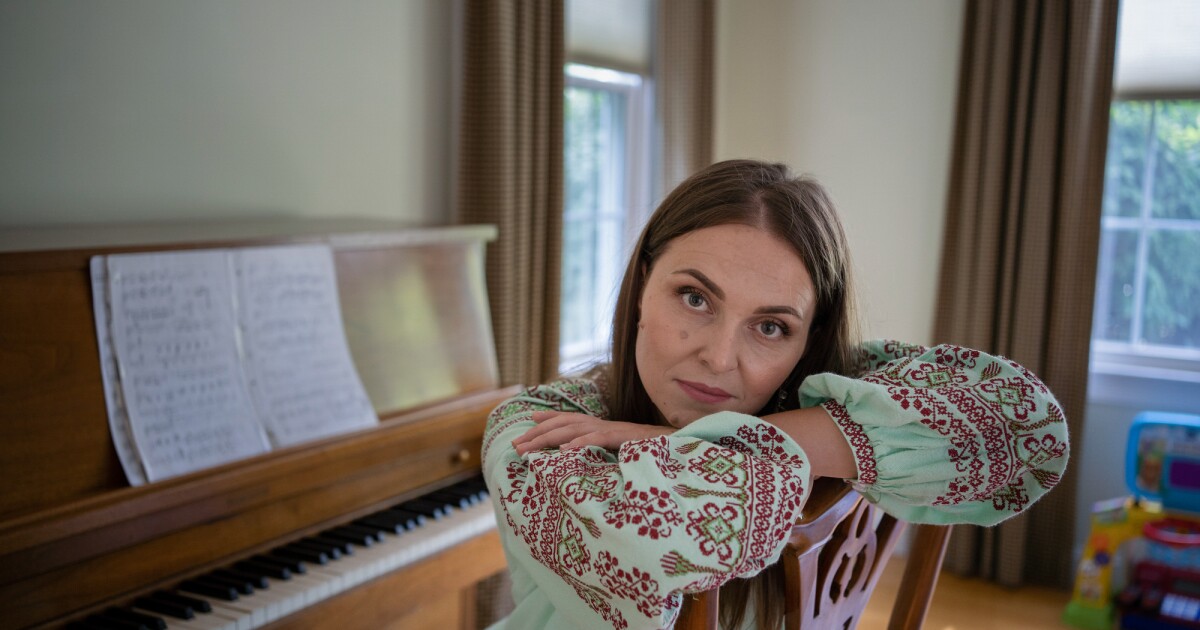 When she left Ukraine, an opera singer gave way to a most precious possession

Earlier this year in Khmelnytskyi, western Ukraine, Olha Abakumova, an opera singer, and her husband, Ihor, a tuba player, put their then 7-year-old daughter Zlata on a pile of blankets in the tub for sleeping. If a missile were to strike, the bathroom seemed to be the safest place in their ninth-floor apartment.

The Khmelnytskyi Philharmonic Orchestra, where they both worked, first closed after the Russian invasion. A month later it reopened and the orchestra continued to give concerts, raising funds for the war effort.

Olha and Ihor were determined to stay in Ukraine even as many of their neighbors fled. They believed the war would end quickly. But one starry, particularly quiet night in March, they heard a strange whistle. They soon learned that Russia had attacked the nearby city of Lviv, where Olha made his debut at the Lviv State Opera nearly a decade ago. It was then that they decided to leave.

Today, Olha and her daughter live in a leafy Boston suburb with Olha’s sister, Liliia Kachura, and her family. Liliia moved to the United States eight years ago and now lives in Sudbury, Mass., with her Ukrainian-born husband, Sasha Verbitsky, and their two young sons.

At the end of April, President Biden announced the United for Ukraine Program, which allows US citizens to sponsor Ukrainians to come to the US When Verbitsky heard about it, he immediately called Olha, encouraging her to apply. Males of military age still have to stay in the country, so Ihor would stay in Ukraine. Within weeks, Olha’s candidacy was approved. In May, mother and daughter took a 14-hour bus trip from Khmelnytskyi to Warsaw.

Olha and Zlata were carrying a small suitcase. They put toiletries, clothes and shoes in it. They also wore a few items of sentimental value: Olha’s mother’s 50-year-old Vyshyvanka, a traditional Ukrainian embroidered shirt; Zlata’s favorite stuffed animal, a turtle; and – most important for Olha – as many partitions as Olha could fit.

“I have a lot of different Ukrainian and Russian music, but when I fled, I only took Ukrainian tunes,” says Olha. “Ukrainian works are very important to me. They connect me to my homeland, my culture and my roots.”

When mother and daughter arrived at Logan Airport in Boston, Verbitsky was there to greet them and take them home. Soon after, Olha found a free piano advertised on Facebook. Verbitsky and Kachura arranged to get the piano for Olha’s birthday. It is now in the children’s playroom, where she practices and sings with her scores from Ukraine.

“When I sing, I see images in front of my eyes,” says Olha. “Words and music go through me and bring me back to Ukraine.”

Some lines, like the last of the song “My Ukraine”, make her cry.

You have crossed the thorns to reach the dreamed stars.

You have sown goodness in souls, like seeds in the ground.

Last August, hundreds of Ukrainians gathered at a Boston cemetery to celebrate their Independence Day. Olha came dressed in a mint-colored Vyshyvanka. When she sang the Ukrainian national anthem, people stopped what they were doing and stood at attention.

His melodic voice cut through the cemetery, past a jungle gymnasium filled with playing children, through the tents where vendors were selling souvenirs and Ukrainian t-shirts. People who had filled their plates with homemade cabbage rolls, pierogis and sausages stopped to listen.

In August, Zlata celebrated her birthday in the United States with her mother, aunt, uncle and cousins. But her father, Ihor, could only congratulate his daughter via video chat from Khmelnytskyi.

Olha is worried about her family still in Ukraine, some of whom are fighting on the front line, and dreams of reunion.

Jodi Hilton is a Boston-area photojournalist. Her work focuses on migration and minorities. She contributes to many newspapers and magazines, including the National Public Radio website.

Old National Bancorp will issue a quarterly dividend of $0.14 (NASDAQ:ONB)