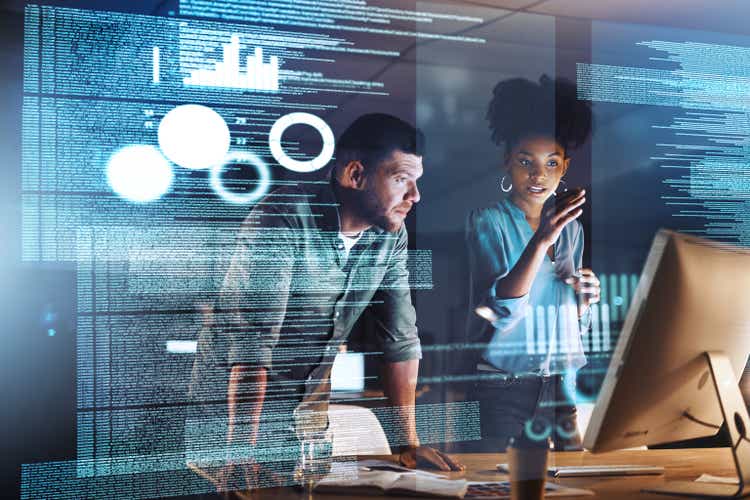 As we continue to anticipate a near-term rebound in equity markets, investors’ main task will be to find declining stocks whose year-to-date losses have thrown them off fundamentals. Pegasystems (NASDAQ: PEGA), in my opinion, fits the bill perfectly. This little-known software stock is actually a hidden giant in the CRM and platform software markets, capitalizing on its legacy customer base to create a more sustainable subscription software business.

Year-to-date, Pegasystems shares have lost 30% of their value, and that’s about 50% below all-time highs. The most recent catalyst for Pegasystems was the mid-February release of its fourth quarter results, where the company missed growth expectations. However, this needs to be read with some context: for a company that is in the midst of a subscription transition, a loss of revenue is actually a secondary symptom of really strong subscription deals.

I stay firmly bullish on Pegasystems. I think it’s a company that has become a known quantity in very attractive end markets, while building the foundation for a very profitable business.

For investors who are newer to this stock, here is a refresher on the key bullish drivers for Pegasystems:

From a valuation perspective: At the current share price near $78, Pegasystems has a market capitalization of $6.35 billion. After deducting $362.8 million in cash and $590.7 million in debt from Pegasystems’ most recent balance sheet, the company’s bottom line enterprise value is $6.58 billion.

Meanwhile, for the upcoming fiscal year FY22, Pegasystems achieved revenue of $1.46-1.49 billion, representing revenue growth of 21-23% year-over-year. This is roughly in line with ACV growth of 20-22% year over year. Note that Pegasystems seems to imply that it is reaching the “mature” point of its cloud transition, where its ACV growth and revenue growth will be more equal; while currently, ACV’s growth far outpaces revenue growth as Pegasystems terminates its fixed-term license agreements, which were a major contributor to revenue in fiscal 2020.

In the middle of this indicative range, Pegasystems is trading at fair 4.5 EV/AC 22 – which is good business for a company that is expected to achieve baseline growth of around 20% per year while generating Positive pro forma EPSwhich is a rarity in the software industry.

The bottom line here: don’t let this title’s relative obscurity and the fact that its growth rates are currently a little depressed due to its transition to the cloud, keep you from seeing the merits of this title, especially at a very modest income multiple.

Pegasystems’ total revenue increased 6% year-on-year to $316.2 million, missing Wall Street’s total expectations of $342.9 million (+15% year-on-year) with a margin nine points. While this sounds pretty bad, note that it’s hard to get revenue for a business in the middle of a subscription transition – where a license customer renewing a subscription contract can be a huge headwind to the revenue growth in the current quarter, although it is a positive factor for the company in the long term.

Revenues would have been even higher without a significant 45% growth in our term licensing backlog. As many of you know, the timing of revenue under our customer cloud model is not — there can be irregularities between quarters and it’s not as predictable as revenue recognition of our Pega Cloud. So it’s important to look at revenue and backlog because that tells the whole story.”

More representative of Pegasystems’ underlying growth, meanwhile, is its progress in ACV. Pegasystems’ total ACV increased 20% year-over-year to $1.00 billion in the fourth quarter, the first time the company’s ACV crossed the $1 billion mark. Also note that the billion dollars of ACV it has “locked in” already covers 67% of the company’s high-end forecast for next year. As mentioned earlier, the company expects revenue growth and ACV growth to follow more closely in FY22.

Here are some additional comments from Stillwell on how the subscription transition has been going since it began in 2017:

The first step was to change the way we sold software away from selling perpetual licenses. Prior to beginning the transition at the end of 2017, more than 50% of our new engagements with our customers were perpetual agreements.

And for the past few years, almost 100% of our new customer engagements are now subscription plans. Our sales team and customers have clearly moved from a perpetual buy-and-sell model to a subscription model, which is a sea change in just a few years. It’s also great to see that our revenue growth rate and our ACV growth rate have really converged closely.

When we started the subscription transition, I talked about our declining revenue growth rate in the early years of the transition, which is exactly what happened. And as we move away from selling perpetual licenses where the license is widely recognized upfront, and you move to a fee-based subscription model, the revenue starts to reverse and normalize as you you are getting closer to the exit of the transition.

From a profitability perspective, note that Pegasystems is also starting to climb out of the hole. The company generated $18.8 million of positive pro forma net income in FY21 ($0.22 pro forma EPS), compared to a larger loss in the prior year.

Pegasystems may not be the most exciting stock in the software industry, but it’s a solid company that’s building substantial recurring revenue bases in two big markets, CRM and BPM. With the stock down about 30% year-to-date and with Pegasystems forecasting an acceleration in revenue as well as an increase in profits in FY22, now is a good time to buy. .