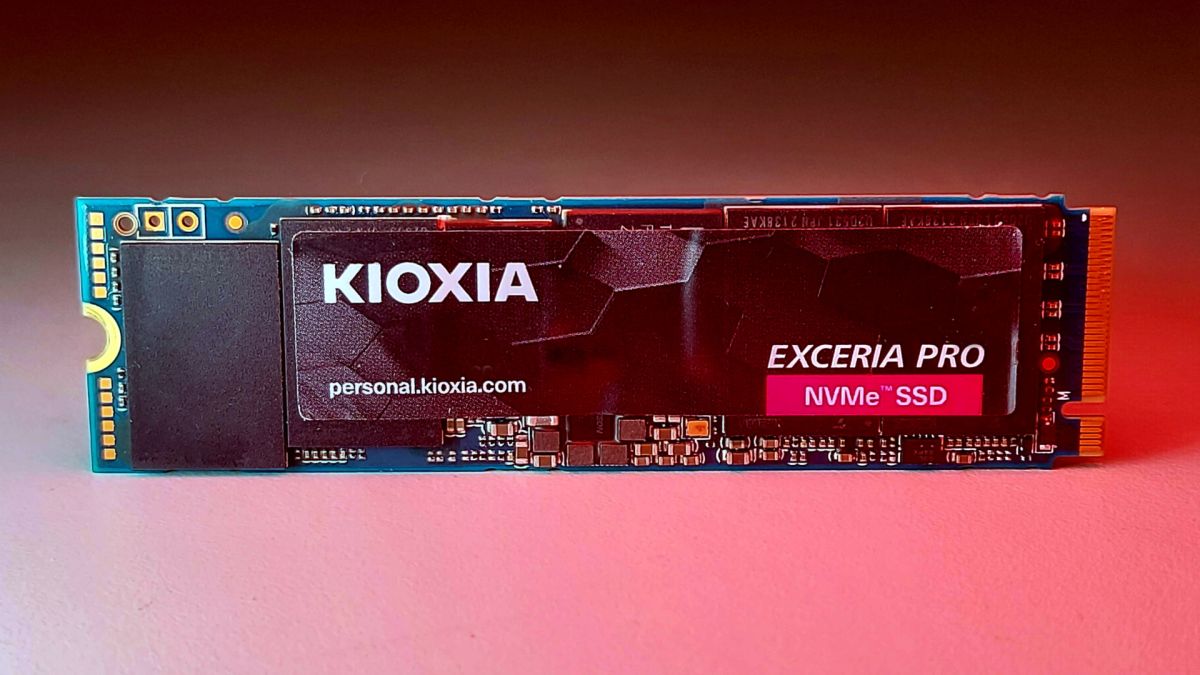 Kioxia might not be as instantly recognizable a name as Western Digital or Samsung, but when you learn it was formerly called Toshiba Memory, you’ll realize you’re in safe hands. Kioxia has tended to focus on the affordable end of the storage market, and indeed we reviewed the 2TB Excelia Plus a year ago and were generally impressed with its value proposition. Kioxia hasn’t offered a fast PCIe 4.0 offering though, at least not until now.

The Excelia Pro’s headline numbers are 7300MB/s and 6400MB/s sequential reads and writes, meaning it’s competitive with today’s fastest drives. Not only that, but Kioxia also offers excellent value for money, with this 2TB drive at just £237. This makes it one of the cheapest next-gen PCIe 4.0 drives at just 12p/GB, although price cuts from other manufacturers undermine this somewhat.

You get a pretty basic drive for your money, with no migration software included in the package and no heatsink to speak of. Not even a thin sheet of metal to help dissipate the heat. Just the bare drive, with the flash and RAM on one side with a simple sticker covering them. They’re bare bones, but as long as the performance is up to spec, we can potentially live without the frills.

In terms of core specs, Kioxia has used its own 112-layer BiCS NAND TLC flash memory for the drive, with 2GB DDR4 RAM cache and what appears to be a rebranded Phison E18 controller. It’s the controller you’ll find in some of the fastest drives, like the Seagate FireCuda 530 and Kingston Fury Renegade. It is, however, cheaper than both of these premium offerings.

As always, you’ll need a PCIe 4.0 platform to get the most out of this drive, either an AMD Zen 2 or Zen 3 CPU and motherboard, or an 11th or 12th Gen Intel CPU and motherboard support. If you’re still using a PCIe 3.0 PC, you can still use this drive, although performance is limited to 3500MB/s due to interface limitations. There are much cheaper PCIe 3.0 drives available if this is also the case.

In theory, this should be one of the fastest drives, with peak reads and writes quoted up there with the best drives. In practice, there’s not much on offer here to make this drive stand out from the crowd, with reasonable, if unspectacular, bitrates across the SKU range. It’s not a slow drive, by any means, but it doesn’t mess with the quoted sequential throughputs either.

The similarly configured Sabrent Rocket 4 Plus (2022) outperforms it in every test, and our favorite SSD, the WD Black SN850, is also the best option for those looking for premium performance. I’ve also included the recently released WD Black SN770 in the comparisons, which offers better real-world performance despite being a non-DRAM drive.

During testing, I also witnessed significant thermal throttling. Running the ATTO benchmark three times in a row resulted in a significant drop in throughput. The first run produced numbers you’d expect and can find in the graphs above, but by the third run performance had dropped to under 3 GB/s, from 6 GB/s when running initial run. It’s a grueling test that doesn’t necessarily replicate a real-life scenario, but no other drive I’ve reviewed recently has suffered like this.

I’ve been running these drives lately without additional cooling to see if they slow down, and for the most part as they heat up they haven’t had any issues. The problem here is that even using the heatsink that comes with the motherboard, I still witnessed too much throttling with temperatures reaching 73°C. This may be well below the temperature of Maximum operating 85°C, but throttling was clear.

Given the acceptable, if not breathtaking, performance and thermal throttling issues, it seemed logical to check if there was a firmware update to get the drive working as it should. This can happen with new drives, and usually it’s easily fixed by downloading software from the manufacturer to check the status of the SSD and make sure everything is working as expected.

Overall, the Kioxia Exceria Pro 2TB NVMe SSD has its issues but is generally a reasonable deal. The thing is, the PCIe 4.0 SSD market is pretty mature now, and there are simply better drives out there. The WD Black SN770, for example, is cheaper and offers better real-world performance. There are also faster high-end drives for around the same price – the WD Black SN850 can be had for £231 right now.

To finish! A Proptech cheat sheet!